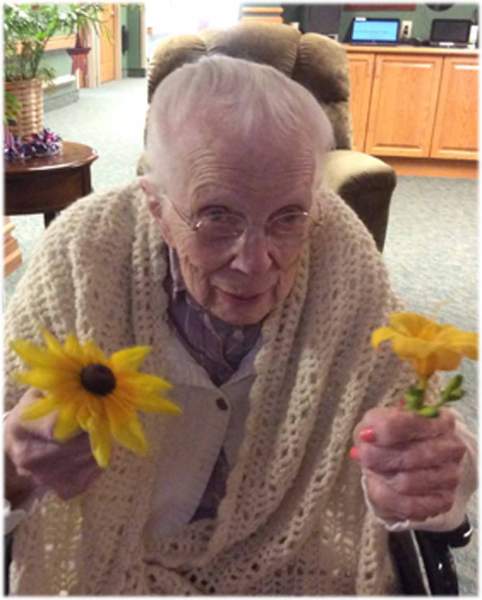 Ann E. Anderson, age 100 of Perham, MN died Thursday, August 6, 2015 in Perham Living. Visitation will be held on Tuesday, August 11 beginning at 10:00 a.m. followed by the funeral service at 11:00 a.m. at the Perham Living Chapel. Pastor Carl Noble will officiate. Burial will be held in the Trinity Faith Cemetery, Fergus Falls, MN.

Ann Ethel Johnson was born November 23, 1914 in Willow Lake, SD the daughter of John J. and Minnie (Waldow) Johnson. She attended country school near Willow Lake. In the 1930's, the family moved to Fergus Falls. During this time, Ann met and eventually married Russell Anderson. Together they raised three children. Ann worked as a cook at Adams Grade School in Fergus Falls. Russell died January 4, 1968. She later worked in the kitchen at Lake Region Hospital and retired at the age of 65. Ann moved to Perham in 1979. Ann loved to volunteer at Perham Manor and the nursing home. She was awarded Citizen of the Year in 2000. Ann loved her grandchildren and spending time at the lake.

Preceding Ann in death were her parents; her husband Russell; her son, Owen; her two grandsons, Christopher Bugbee and Jeffery Anderson; and her brother, Carl Johnson.
To order memorial trees or send flowers to the family in memory of Ann Anderson, please visit our flower store.