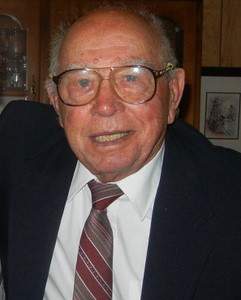 Aubrey Westlon Butler was born on June 16, 1924 in Dilworth, MN to Elmer and Regina (Matuszewski) Butler. They moved to Detroit Lakes, MN where he graduated from Detroit Lakes High School in 1942. He enlisted in the Navy in July of 1942 and after boot camp was stationed with the Marines as a Medic in the World War II South Pacific campaign. He saw action on the islands of Guadalcanal, Pelelui and Iwo Jima. His aspirations to become a doctor dimmed after his time as a Medic, so once the war was over, he decided to attend NDSU in Fargo, ND and studied Engineering on the GI Bill. While at NDSU he met Lucille Book. On March 20, 1948 they were married. After graduation, they moved to Wausau, WI and he started his career as an Electrical Engineer. He then moved on to work for Interstate Power Company in Iowa where they called Decorah, Dubuque and finally Mason City home. During this time Lucille and Aubrey were blessed with six children, who all continue to enjoy the outdoors – one of the many wonderful traits Aubrey instilled in them. Aubrey was also involved with many service groups including Boy Scouts, Sertoma, Elks Club, American Legion, VFW, Toastmasters, Junior Chamber of Commerce and the Methodist Church. After retiring from Interstate Power in 1986, Aubrey and Lucille moved back to Minnesota and settled in their newly-built house on Lake Schuster outside of Perham, MN. They embraced the Perham community and enjoyed fishing, hunting, traveling, and their family and friends.

Aubrey was preceded in death by his loving wife of 66 years, Lucille; his parents, Regina and Elmer; and his older sister, Maddy.

A Celebration of Life will be held on June 27, 2019 at Perham United Methodist Church, Perham, MN with Military Honors at Calvary Memorial Cemetery.

In lieu of flowers memorial donations may be made to American Legion or Perham United Methodist Church. Aubrey's Memorial Folder
To order memorial trees or send flowers to the family in memory of Aubrey Butler, please visit our flower store.