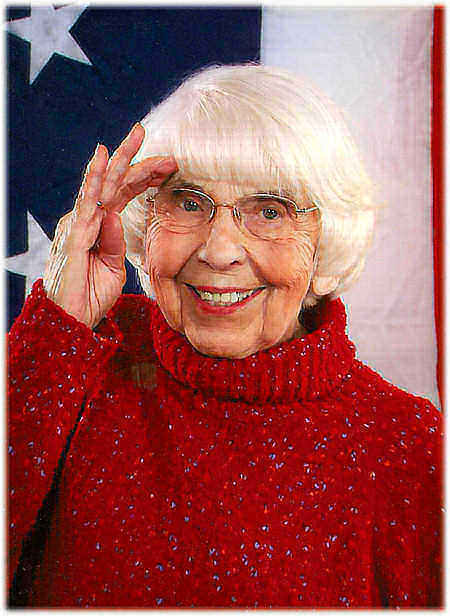 Audrey Minnie (Nobles) Esser, age 94, of Perham, MN, died peacefully Saturday, Sept. 28th, 2013. Audrey was born in Naylor, Missouri on June 15th, 1919. She served in the Women's Army Auxiliary Corps (WAAC) during WWII where she was one of seven women selected to be flight instructors to train pilots to safely land their planes during a blackout or night mission. It was during her experience at Barksdale Field in Shreveport, LA that she met Robert J. Esser. Audrey and Bob were married on February 10, 1945 and moved to Perham where she was a respected member of her community. They lived on the corner of 1stAve S and 4th St in what is known as "The Esser House". She lived there for over 60 years and welcomed everyone in for a cookie or a piece of pie. She spent the last few years in, what she referred to as her condo, at Perham Living in the Harvest Glen Community. Her patriotic spirit and commitment to her community was strong throughout her life. She was a member of the Women's Auxiliary, VFW, American Legion, American Red Cross, Catholic Daughters, American Cancer Society, and Christian Mothers. She was a member of St. Henry's Catholic Church. She hosted or attended a monthly rosary group and helped prepare numerous meals served in the church basement. Audrey was a member of the TEC community and supported others in their spiritual journey. She loved to bake, play cards, make quilts, garden, and do water aerobics. She was a cook at Ebeling's Cafe where she was noted for her caramel rolls and pies. Audrey was passionate about the Relay For Life, cancer campaign, and spent many volunteer hours to raise money for the cause.

She was extremely proud of her husband and children and all of the things they accomplished. She often would say, "I am the luckiest women in the world". She was an amazing matriarch, teacher, and role model to her children, grandchildren, and great grandchildren.

Preceding her in death are her parents, John and Lillie Nobles; her husband, Robert Esser; her sisters, Irene and Esther Nobles; her brothers, Elvin, Marion, John, and Lester Nobles; her son, Thomas Esser; her great granddaughter, Janelle Gibson; and her son-in-law, Keith Swanson.

"Well done good and faithful servant. We will miss you."

In honor of her love for church and children, memorials preferred to St. Henry's School, Perham, MN.
To order memorial trees or send flowers to the family in memory of Audrey Esser, please visit our flower store.