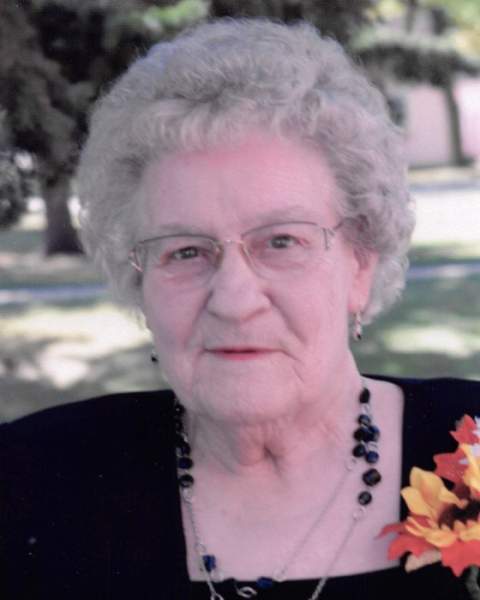 Bernice was born on July 21, 1928 in rural Perham to George and Clara (Ledermann) Guck.  She attended St. Joseph’s country school and graduated from Perham High School in 1946.  After graduation she worked at the Eagles Café in Perham.  On November 25, 1948, Bernice was united in marriage to Thomas Laughlin.  Thomas passed away on August 3, 2000.

Through the years Bernice worked at Tuffy’s, Perham Auction Barn, Huebsch Turkey Farms and her favorite, Perham Heart of the Lakes Elementary School.  Bernice was an avid Yellow Jacket fan and attended the activities of her children and grandchildren while listening to other Yellow Jacket activities on the radio.  She enjoyed crocheting, jigsaw puzzles and puzzle books.

Bernice was a longtime member of Sacred Heart Catholic Church in Dent, MN where she was a member of the Christian Mothers.  She served as an officer and group leader.  She also taught CCD class for several years.

Bernice will be sadly missed by her family and friends.  We wish to thank the staff at the Good Samaritan Nursing Home in Battle Lake where she received wonderful care.

Visitation will be 5:00-8:00 p.m. with a rosary at 7:15 and parish prayers at 7:30 on Wednesday, October 16 at Schoeneberger Funeral & Cremation Service in Perham. Visitation will continue from 10:00-11:00 a.m. followed by the funeral Mass at 11:00 on Thursday, October 17 at Sacred Heart Catholic Church in Dent. Burial will be in St. Joseph Catholic Cemetery near Perham. Bernice's Memorial Folder
To order memorial trees or send flowers to the family in memory of Bernice Laughlin, please visit our flower store.