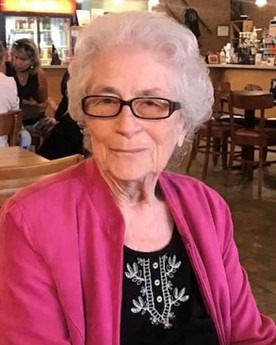 Betty Ann Mickelson was born June 14, 1935, to parents Roscoe and Frances (Bleim) Smith in Fergus Falls, MN.  She attended McKinley Elementary School in Fergus Falls.  In 1944 her parents purchased the Peach Resort on Star Lake and renamed it “Rocky’s Resort.” Betty enjoyed her childhood at the resort and made many friends during the summers with families who would come to vacation at the resort year after year, but it wasn’t all fun and games, she had a lot of responsibilities at the resort. Betty being the eldest of three girls would help in the restaurant, convenience store, clean cabins, and many other jobs associated with living and working at a resort.

Betty attended high school in Perham and graduated in 1953. After graduation she moved to Minneapolis where she worked as an information operator for Bell Telephone Company which she loved.

Betty came home to the lake often for holidays and family events and it was on one of these weekends in February 1955, unbeknownst to her at the time, Betty would meet the love of her life. Earl was a dashing young man from a nearby farm who loved to socialize with his friends and neighbors at the resort. Earl and Betty would date off and on that year until 1956 when she decided to move to Denver, CO with her best friend, Barbara. Betty worked as a secretary for several companies in the Denver area for the next year and she did like the area and intended to stay, however, destiny had other plans for Betty. She would come home to the resort where Earl was still hoping she would return. The sparks began to fly again as Earl charmed his way into her heart, and the rest, as they say, is history.

Earl and Betty were married on June 21, 1958. They lived in Minneapolis for a time and several other cities in Minnesota until finally settling back where they started on Star Lake. They built a home on the north shore of Star Lake in 1965 where Earl still lives to this day. They had three children, Roxann, Julie, and Michael. Betty’s favorite job was that of wife and mother which she did full-time until 1973 when she went back to work as a hostess at the Chalet Chanticleer restaurant on Otter Tail Lake. Betty continued her career in hospitality and worked for the District 166 restaurant, Galaxy Resort restaurant, and finally the Farmer’s Table (Nootzies) in Dent, MN.

Betty retired in 1997 and continued to enjoy her many family activities, children, and grandchildren. She even took on some cleaning jobs, as she enjoyed cleaning. It must have been good childhood memories from cleaning at the resort. In the summer of 1998, Betty and Earl traveled by train to New Hampshire to visit with her BFF Barbara. Her first time seeing the ocean!

In 2015, Betty was diagnosed with dementia which she and Earl were able to manage at home until 2019 when it became too difficult for Earl to care for her. Betty then moved to Riverfront on Main in Pelican Rapids. It was heartbreaking for our family to witness this fiercely devoted and loving wife, mother, and grandmother slowly be taken away from us. Betty was very well cared for during her time at Riverfront so we took solace in the knowledge that if we could not be her full-time caretakers, she was comfortable and safe in her new home.

Betty peacefully went to be with the Lord on December 18, 2022. She is survived by her husband Earl of 64 ½ years; her children Roxann (Todd) Mickelson of Shelly, MN, Julie (John) Roth of Miltona, MN, and Michael (Lisa) Mickelson of Pelican Rapids; eight grandchildren; 17 great-grandchildren; her sister Nancy Bursey of Plymouth, MN; and numerous nieces and nephews. She was preceded in death by her parents; her sister Darleen O’Neil; and her grandmother Mary Bleim.

Visitation will be 4:30-7:30 p.m. on Thursday, January 5, 2023, at Schoeneberger Funeral & Cremation Service in Perham. Visitation will resume beginning at 1:00 p.m. followed by the memorial service at 2:00 on Friday, January 6 at the funeral home.

To order memorial trees or send flowers to the family in memory of Betty A. Mickelson, please visit our flower store.
Mickelson, Betty_Folder.pdf
Open