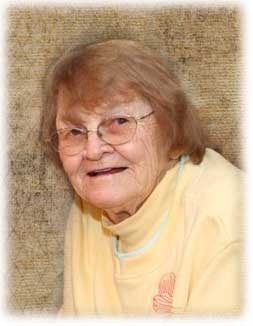 Betty Torgerson passed away peacefully on Thursday, January 30, 2014 at Perham Living at the age of 82. Betty had been a resident of Perham Living for a short time, but quickly became friends with her other housemates and staff and we appreciate all their kindness.

Betty was born on May 31, 1931 to Berger and Marie (Nygaard) Aasen in rural Underwood, MN. She graduated from Underwood High School and on February 26, 1952 she and Donald Torgerson were married. Betty was a stay-at-home farm wife and mother to their six children. She took so much pride in their farm and named all her cows. When asked just recently which cow was in the first stanchion in the barn, she gave it minimal thought and came up with the right name. She spent many hours on her riding lawn mower to keep up the beautiful yards at the farm and at their Dead Lake home. When not working, she could be found relaxing at the lake with her infamous Tupperware cup.

Betty is survived by four of her children, Gary (Janelle) Torgerson of Richville, Tom (Kareen) of Oakdale, Steve (Bonnie Lien) of Richville, and Barb (Dave Nagel) of Richville; 18 grandchildren; 23 great-grandchildren; one sister, Fran Sauer of Fergus Falls; one brother, Norman (Mae) Aasen of Underwood; and a host of family and friends that loved her.

A funeral service will be held on Monday, February 3, 2014 beginning at 11:00 AM at the Richville United Methodist Church. Visitation will be held on Sunday, February 2, 2014 from 1:00-4:00 PM with a prayer service at 4:00 PM at Schoeneberger Funeral Home and will resume one hour prior to the funeral at the church.
To order memorial trees or send flowers to the family in memory of Betty Torgerson, please visit our flower store.