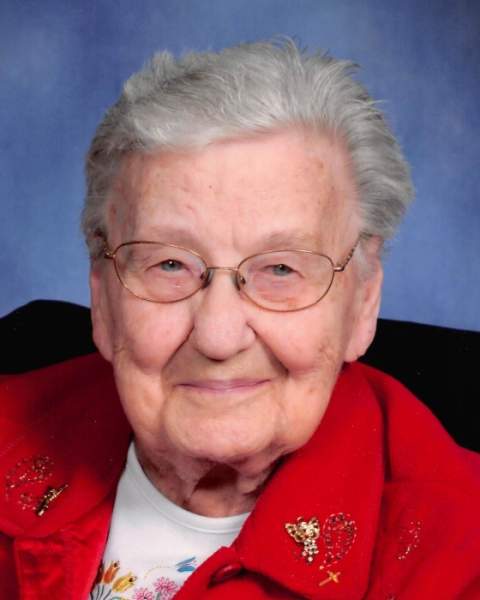 Catherine Berns was the oldest daughter of Leo and Agatha (Siebels) Berns, born July 1, 1924. She grew up on the family farm and worked for Drahmann's Department Store in Perham. She also worked for John and Anna Doll on their farm. Anna asked their son Norbert to take Catherine home one evening. Norbert's nephew Gale said, "No, I will take her home," so they flipped a coin and Norbert won. On November 15, 1944, they were married. They were the fourth generation to live and farm the Doll Family Farm. Catherine helped Norbert on the farm. Her main job was milking cows. Catherine was living with her son Roger and daughter Alice on the family farm, at the time of her death

Catherine enjoyed sewing, quilting, crafts, knitting and crocheting, gardening, canning and flowers. She was active in the church and Christian Mothers.

Visitation will be from 5:00-8:00 p.m. with a rosary and parish prayers at 7:30 p.m. on Monday, March 26 at Schoeneberger Funeral & Cremation Service in Perham. Visitation will resume beginning at 10:00 a.m. followed by the funeral Mass at 11:00 a.m. on Tuesday, March 27 at St. Lawrence Catholic Church near Perham. Burial will be in the church cemetery. Catherine's Memorial Folder
To order memorial trees or send flowers to the family in memory of Catherine Doll, please visit our flower store.