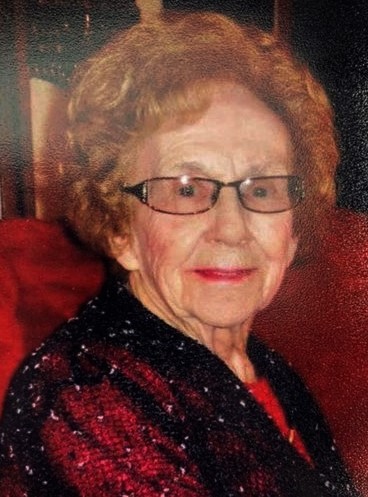 On Monday, May 3, 2021, Eleanor Stromberg passed away peacefully at the Hadley House Assisted Living in Perham, MN. At her passing, she was just 6 days short of her 99th birthday.

Eleanor was born in Egeland, North Dakota on May 9, 1922 to Grace and Melvin Rock.  Following high school she went to Jamestown State Teacher’s College where she graduated at the top of her class.  After college she moved to Hollywood, California to help with the war effort (WWII).  She worked for Lockheed Corporation in several roles including riveting aircraft (she was a “Rosie the Riveter”).  In the evenings she and her friends went to the famous Hollywood Palladium Ballroom where she danced to all the big bands of the era including the Harry James Band and the Tommy Dorsey Orchestra.  At the end of the war she came back to North Dakota and taught school in Rock Lake, ND, Perham, Battle Lake, Pequot Lakes, Crosby, Brainerd and Wadena.  It was in Perham she met and married John Stromberg who had just returned from the Pacific theatre after serving in the Navy.  They met at Babe’s Resort (now Zorbaz) on Little Pine Lake in 1946.  They were married for 64 years and have owned a cabin on Little Pine since 1965.

Eleanor and John enjoyed traveling and took many fabulous trips over the years including long adventures to Europe, Yugoslavia, Africa, Australia and the US East Coast and Alaska.  Eleanor also taught school in Limerick, Ireland after retiring from the Wadena School System.  Eleanor and John loved weekend dancing and bridge club with lifelong good friends from Wadena.

Eleanor is preceded in death by her parents, her husband, John, and her son, Greg.  She is survived by her daughter, Linda (Dave) Campbell, Eden Prairie; her daughter-in-law, Sue Folkestad Stromberg, Florida; her sons, Doug (Jeannie), Wadena, and Steve, Chanhassen; two sisters-in-law, Kay Stromberg, Fargo and Judie Stromberg, Denver;  11 grandchildren (one named Timothy Rock-in her honor),  21 great grandchildren (one named Henry David Rock Campbell) and many nieces and nephews.  All of her grandchildren will forever remember her as Grandma Nony, who made amazing cakes for all of their special occasions.   Over the years she was very active in her church, community clubs and organizations, always willing to take leadership roles, even into her 90s.

Her love and generosity to her children and grandchildren will always be remembered as well as her pride in her home state of North Dakota.  “It’s the best state in the union!” she would always say.

A celebration of life will be held at a future date in Perham.

The family wishes to especially thank the staff at Hadley House and Red River Hospice staff for their excellent care and kindness to Eleanor.

Memorials can be made to the Wadena-Deer Creek Education Foundation.

To order memorial trees or send flowers to the family in memory of Eleanor Stromberg, please visit our flower store.