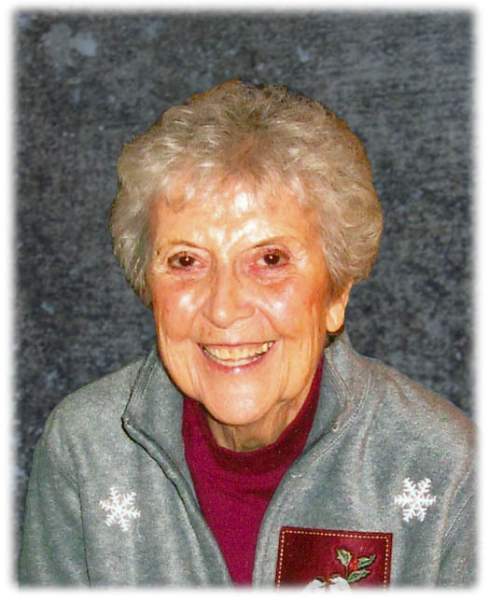 Elenore Mary (Grismer) Adamczyk was born May 9th, 1924, in Perham, MN to John and Olga (Butler) Grismer into a family of twelve. She attended St. Joe's Country School and graduated from Perham High School in 1942. After high school she moved to California with friends. During World War II, she began working in a factory as a Rosie the Riveter working on airplanes.

Upon returning to Perham she worked at Drahmann's Department Store. In 1950, she married Franklin Adamczyk in St. Joe's Parish House. While she was raising her three children, Jane, Jim, and Mary Sue, she also helped out at Frank's Sport Shop. Frank passed away June 8th, 1972, and she continued to operate the store for a short while before selling to Gene Adamczyk. She worked at The Pines Gift Shop and White Drug. She also touched the lives of many children and their families through babysitting.

She was a member of the St. Henry's Christian Mothers and the VFW Ladies Auxiliary. She always took pride in living in one of the oldest wood houses in Perham. (Now the Brew)

Ellie enjoyed playing cards, watching cooking shows, and visiting with friends and family with a coffee and sweets. Her grandkids and great grand kids were truly one of the highlights of her life. She would light up and always had a smile on her face when they were in her presence. She was truly an extraordinary woman in so many ways. She leaves behind the Prairie View Staff, and the great care she received while there, and will miss her dear friend, Lois, and the good times they shared.

Elenore died January 17th, 2015, at Prairie View Assisted Living, under the Care of Red River Valley Hospice. Visitation will be held on Tuesday, January 20th, 2015, from 5-8pm with parish prayers at 5:30pm at Schoeneberger Funeral Home in Perham, MN. Funeral Mass will be Wednesday, January 21st, at 10:30am at St. Henry's Church, with viewing one hour prior to mass. Father Matthew Kuhn will officiate. Burial will be held at St. Henry's Cemetery.

Memorials preferred to Red River Valley Hospice and St. Henry's Church or School.
To order memorial trees or send flowers to the family in memory of Elenore Adamczyk, please visit our flower store.