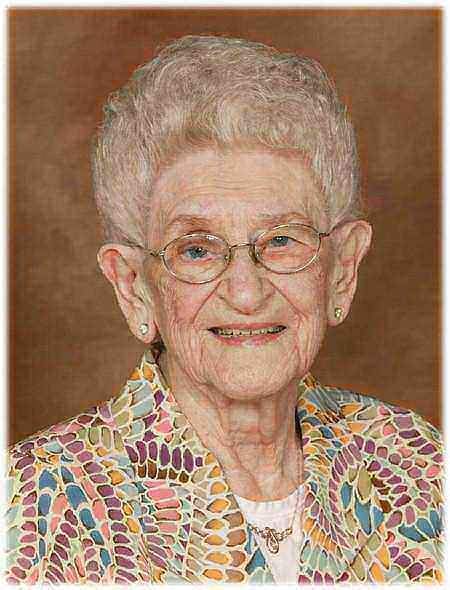 Babe was born in Perham, on January 7, 1921 to Killian and Anna (Fiedler) Guck. She grew up near Perham and attended Country School District 248. Babe was united in marriage to Edward Ebeling on August 14, 1940. Their marriage was blessed with six children. She was a member of St. Paul's Lutheran Church, which she faithfully attended. Ed & Babe farmed in the Perham area until 1952 when they moved into Perham. Babe worked at a local café until 1960 when she and Ed purchased that café. They operated the "Ebeling Café" until 1985.

Through the years Babe was an avid reader and knitter. She also enjoyed cooking and baking with pastries being her specialty. Babe loved a good game of cards whether it was bridge with the Bridge Club, whist at Richville or Sunday evening card games with her family. She was active in church and community organizations including L.W.M.L., Women's Bible Study, and Abes & Sarahs at St. Paul's Church and the American Cancer Society.

Babe continued to live in her home until the time of her death. She treasured the time she spent with family and friends and always welcomed her grandchildren and great-grandchildren when they would stop to visit.

Babe was preceded in death by her husband; one son, Daniel; her parents; and nine brothers and sisters.
To order memorial trees or send flowers to the family in memory of Emelia Ebeling, please visit our flower store.