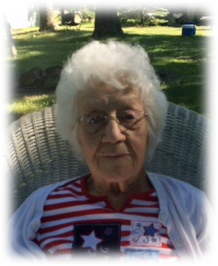 Erna was born July 4, 1915, at home, in rural Pipestone, Minnesota, the daughter of John and Lydia (Lange) Peterson. She attended country school in Sweet Township of Pipestone County. She was baptized and confirmed into the Lutheran Faith.

On September 5, 1935, Erna was united in marriage to Reinhold R. Wendt in Pipestone Minnesota. To this union, 6 children were born. They lived in numerous places in Minnesota following her husband's career in construction, finally settling at Wildwood Resort, on Round Lake, near Dent, Minnesota. She operated and ran the resort for 20 years, continuing to live there in retirement. She loved her home on the lake, entertaining her family, cooking, baking Ma's buns, quilting, sewing and gardening. Erna also loved and enjoyed her church family at Immanuel Lutheran Church. She was actively involved with the Dent Diggers Garden Club and the Senior Citizens Center. She treasured her time with family, extended family and friends and watching her grandchildren and great-grandchildren grow. For the past 5 years, she was a resident of the Lydia House in Fergus Falls, Minnesota, being lovingly cared for by her daughter Linda, granddaughter Julie Blaskowski and staff.

Visitation will be held on Friday, September 9 from 10:00-11:00 a.m. followed by the funeral service at 11:00 a.m. at Immanuel Lutheran Church in Dent, Minnesota. Pastor Dan Abrahams will officiate. Burial will be held in the church cemetery. 
To order memorial trees or send flowers to the family in memory of Erna Wendt, please visit our flower store.