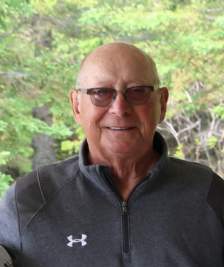 Erv was born January 16, 1934 in Bluffton, MN to Alois Michael and Clara Antoinette (Langer). He with the fourth of eleven children and the oldest son. Growing up on the family farm in Bluffton, he learned the value of hard work which carried with him for the rest of his life. After graduating from Wadena High School in 1952, he moved to Valley City, ND and worked as a mechanic. In the fall of 1953, he went into the Army. He rose to the rank of Staff Sargent and served for two years. He is a Korean Conflict Veteran, VFW lifetime member, American Legion lifetime member, and Disabled American Veterans member. Erv was a longtime volunteer, often helping other veterans. He volunteered at an air museum in California, drove people to hospital visits, ITOW, and Perham Health. Erv was active in the honor guard for military funerals in the area.

Upon leaving the Army, he moved to Moorhead and started working for the S. S. Kresge Company/K-Mart. He was transferred to Chicago, IL. In 1958, he married Dolores Werr and they had four children (Lynn, Ervin Jr., Ron, and Stephen). Working for Kresge’s, they lived in Illinois and Wisconsin. In the early 1970s, Erv left the company and settled in the Dent, MN area to operate a resort on Star Lake as well as manage the Hardware Hank in Perham. In the mid-1970s, Erv and Dolores started a small distribution company (Map Unlimited) that was later known as D & E Enterprises. Other businesses that Erv owned included The Flamingo (Detroit Lakes), EDDCO Manufacturing, Perham U-store, Dent U-store, D & E Travel, and North Court Apartments. Erv retired in 2005.

After nearly 35 years of marriage, Dolores passed away on February 20, 1993. After the passing of his wife Dolores, his next passion began, classic cars. He started with a 1955 red Ford Thunderbird convertible. Over the years, he acquired many additional cars including 1956, 1957, and 1962 Ford Thunderbirds, 1948 Lincoln hot rod, 1947 Lincoln with the original V-12 motor, and a 1934 Chevy street rod. He was very active in the local car clubs including Perham Area Cruisers, Fergus Falls Classic Car Club, and the Uninvited Car Club. He participated in car shows and car meets throughout central Minnesota winning many awards for his cars.

In 1995, Erv married Joyce Willenbring, first living on Paul Lake, and then building a house in Dent on Rice Lake. They separated in 2019. Erv moved to Waxahachie, TX to take advantage of the warm weather as well as being closer to his sons Ervin Jr. and Ron. He lived there until his death.

A Memorial Mass will be held on Friday, July 16, 2021 at 11:00 a.m. at Sacred Heart Catholic Church in Dent, MN.  Visitation will be on Thursday, July 15 from 4-7 p.m. at Schoeneberger Funeral & Cremation Service in Perham, MN with a Rosary at 6:30 p.m. followed by Parish Prayers at 7:00 p.m. Erv will be buried in the Sacred Heart Cemetery in Dent, next to his wife, Dolores.