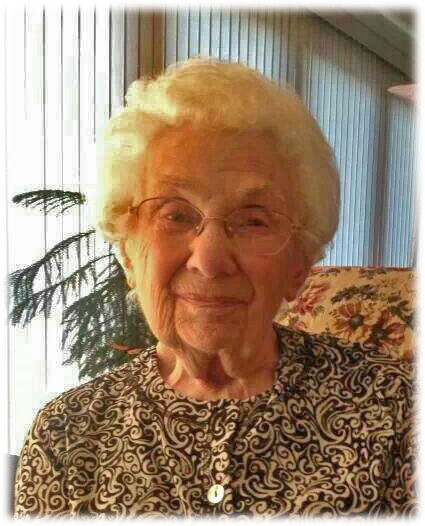 Hazel Marie Bretz age 98 of Perham, MN passed away peacefully Saturday, November 19, 2016 at Prairie View Assisted Living, Perham where she had been a resident for the past four years.

Hazel was born March 9, 1918 in rural Wadena, MN, the daughter of Otto and Elizabeth (Greb) Brunko. She was the youngest of four children.

As a small child the family moved to Deer Creek, MN where she attended school and graduated from Deer Creek high school. She was united in marriage to Albert Bretz on December 31, 1941. After Albert returned from World War II in 1945, the couple resided in Wadena where she and Albert purchased a home. Together they raised two daughters and one son.

Albert and Hazel moved to Perham in 1961 when they purchased the Our Own Hardware Store and they resided in Perham since. Hazel was a member of St. Paul's Lutheran Church in Perham and was a member of the American Legion Auxiliary and Historical Society. She helped with the book-work at the store over the many years and continued to do so on a limited basis into her later years.

Over the years Hazel and Albert took many trips connected with the Our Own Hardware franchise. Mostly Hazel liked staying close to home and family.

Preceding Hazel in death were her parents; her husband Albert; her brother Oscar; her sisters Esther Menge and Irma Linderman. 
To order memorial trees or send flowers to the family in memory of Hazel Bretz, please visit our flower store.