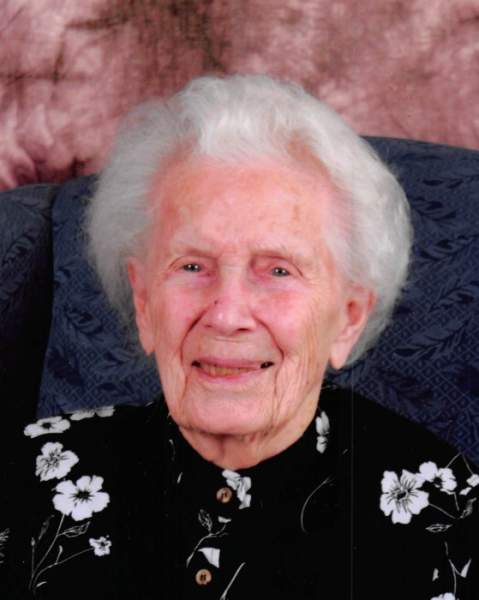 Hazel Luebke lived through the South Dakota dust bowl years, worked as a rivet inspector on battleships during World War II and went on to become a wife, mother and, as a Perham Living staff member said, “a grand old gal.”  Her life ended at Perham Living on Monday, July 1, 2019 at the age of 101.

Hazel Georgiana Johnson was born in Willow Lake, SD on January 25, 1918 and grew up there with her parents Johnny and Minnie (Waldow) Johnson, brother Carl and sister Ann. They moved to Fergus Falls, MN where her father owned and operated The Corner Bar for several years. Hazel was working there when she met Clarence Luebke after the war. They were married on November 27, 1946 and began a family with sons Roger and Jim. The family moved often as Clarence worked steel construction, but they finally settled in West Fargo, ND.

In the early 60s, they moved to Squaw Point on Big Pine Lake near Perham.

Visitation will be 10:00-11:00 a.m. followed by the funeral service at 11:00 on Monday, July 8, 2019 at Schoeneberger Funeral & Cremation Service in Perham. Burial will be in St. John’s Lutheran Church Cemetery of Corliss Township.

Hazel's Memorial Folder
To order memorial trees or send flowers to the family in memory of Hazel Luebke, please visit our flower store.