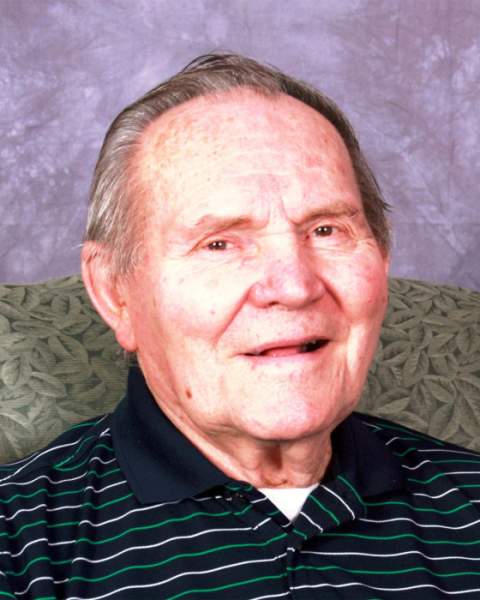 James “Jim” Clement Huebsch, 97, of Perham, MN passed away peacefully in his sleep the morning of January 28, 2018 at Perham Living.

Jim was born June 12, 1920, in Grand Forks, North Dakota, and was the third of nine children born to Michael and Florence (Weis) Huebsch. Jim was merely four years old but he always remembered the 19-hour trip by car that included 14 flat tires when his family moved from Grand Forks to the Rush Lake area by Perham, MN.

Jim attended St. Henry’s Catholic School through 8th grade and graduated from Perham High School in 1938 where his favorite subject was Industrial Arts. He then worked for 18 months in Perham until the lure of a job in the aviation field led him to North American Aviation in California where he worked for 3-1/2 years.

He enlisted in the U.S. Army in 1943 and served with the 93rd Anti-Aircraft Artillery Gun Battalion for 51 weeks on the island of Ie Shima (Japan) after the invasion of Okinawa. After receiving an honorable discharge following WWII, Jim returned to California for six months, but soon found his way back to Perham where he opened “J.C. Huebsch Cabinet Shop” in June of 1947, later to be named Huebsch Woodcraft.

Romance struck Jim around this same time when he volunteered to help wash dishes with a pretty neighbor girl at a party at St. Lawrence Catholic Church at Rush Lake. Just a few months later on September 1, 1947, Jim married Margaret Mary Doll at St. Lawrence Church and family life began. This union brought forth seven sons and two daughters.

Jim was well known for his master craftsmanship in his custom cabinetwork, church and office furniture throughout the region. His shop became a family affair and he often claims his kids knew how to hold a hammer before they learned how to hold a spoon.  His philosophy for raising children was to keep them busy and out of trouble…and he kept them busy not only learning the tools of the trade at the shop, but also selling fishing worms, maintaining several large gardens, planting trees, mowing grass, busting up beaver dams at Rush Lake, and much more. (But it seemed that Jim would be the one who would get in trouble by getting his truck stuck in the mud out at Rush Lake every spring).

Jim was an active member of St. Henry’s Catholic Church in Perham and the Knights of Columbus where he served as the Grand Knight and was a charter member of the 4th Degree Knights. He was also a long-time member of the American Legion and Perham VFW Clubs. He loved Perham and the Rush Lake area and was grateful to spend his final years here.

Jim was preceded in death by his parents Michael and Florence Huebsch; his brothers Joseph, Rev. Vincent, Michael and Wilfred; and his sisters Deloris and LaVerne. He is survived by his loving wife of 70+ years Margaret (Doll) Huebsch; his children Jerome of Perham, Thomas (Suzanne) of Lake Elmo, MN, Richard (Kris) of Ottertail, MN, Dennis (the late Roanne) of Detroit Lakes, MN, Duane of Perham, Dr. Ronald (Amy) of Princeton, MN, Mary (Gary) Hager of Detroit Lakes, Janice of Thief River Falls, MN and Joseph (Denise) of St. Cloud, MN; 21 grandchildren; 17 great-grandchildren; and his siblings Sister Rosemary Huebsch OSB of St. Cloud and Donald Huebsch of Mt. Angel, OR.

A heartfelt thank you goes to the staff of Prairie Knoll at Perham Living for the excellent care and support they provided for Jim over the past six years.

Jim requested that memorials be sent to St. Henry’s Area School or the ITOW Veterans Museum in Perham.

Visitation will be from 4:00-8:00 p.m. with a Knights of Columbus service at 6:30 p.m. and parish prayers at 7:00 p.m. on Wednesday, January 31 at Schoeneberger Funeral & Cremation Service in Perham. Visitation will resume beginning at 10:30 a.m. followed by the funeral Mass at 11:30 a.m. on Thursday, February 1 at St. Henry’s Catholic Church in Perham. Burial and military honors will be in the church cemetery followed by lunch at the church. Jim's Memorial Folder
To order memorial trees or send flowers to the family in memory of James Huebsch, please visit our flower store.