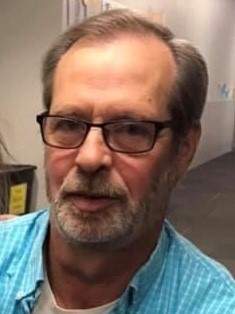 John Klein, age 61, passed away April 9, 2020 at his home in New York Mills, MN, after a courageous battle of Stage 4 stomach cancer. John was born in Naples, Italy to Frank and Edna (Leslie) Klein of Southampton, NJ.

Following in his father’s footsteps, in 1975 John joined the United States Army, where he was stationed in Germany and served until 1978, returning home shortly thereafter. In May of 1986, John was united in marriage to Linda Klein in Mt. Holly, NJ. They were blessed with two beautiful daughters, Kristin and Kelley.

John moved to New York Mills in 2002 and was employed by Esser’s Plumbing and Heating for eight years. He then purchased his own semi and became an owner/operator for Tony’s Transfer, where he continued to work until his diagnosis.

John was a lover of the great outdoors. Whether you found him cruising around lakes country on his motorcycle with his fiancée Deana Wells, boating, attending auctions to find “treasures,” or attending the annual Ronald McDonald Run, the outdoors is where he enjoyed himself. Along with annual trips to the Caribbean with great friends and family, there was always sure to be an adventure.

John loved his family very much and enjoyed every moment he was able to spend with them. He was a beloved son to his mother, Edna, whom he would call daily. A fantastic father, full of life lessons, as well as a loving grand-pop to his six grandchildren, whom he loved immensely and was so proud of.

Preceding John in death was his father Frank Klein and his granddaughter Harper Huebsch.

John is survived by his fiancée Deana Wells of New York Mills; mother Edna Klein of Southampton; daughters Kristin (Chad) Huebsch of New York Mills and Kelley Klein of Delran, NJ; sisters Debbie (Gene) Auriemma of Naples, FL, Donna (Rich) Noll of Marlton, NJ, Diana (Jay) DiLeonardo of Southampton and Danielle Klein of Southampton; grandchildren Landon (10), Hailey (5), Bryce (4), Jackson (4), Cole (2) and Carter (2); along with several nieces and nephews. John will be deeply missed by all of us that loved him dearly.

John’s last request was to be buried next to his granddaughter, Harper at the St. Lawrence Catholic Church Cemetery near Perham, MN. A Celebration of Life Ceremony will be held at a later date.

To order memorial trees or send flowers to the family in memory of John Klein, please visit our flower store.

No services to be held