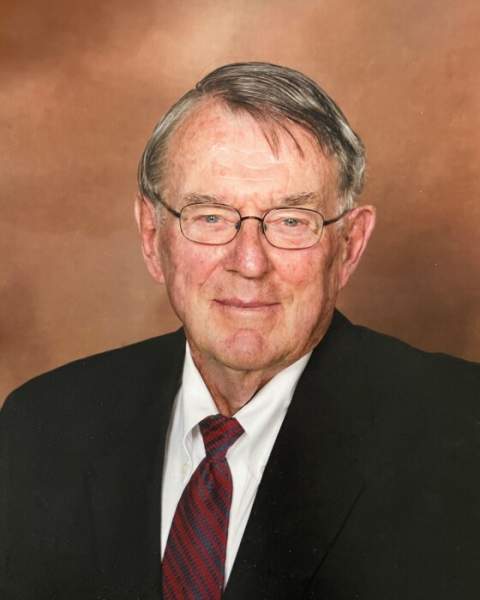 John “Jack” James Cavanagh was born to Charles and Gladys (Plath) Cavanagh on October 11, 1930. He graduated High School in Wahalla, ND. He furthered his studies at NDSU and was a starter on the basketball team winning the 1952 North Central Conference Championship. He graduated from NDSU in 1952 and enlisted in the United States Air Force where he served as an Air Traffic Controller until 1954. He was stationed in Korea during the Korean War. On January 24, 1953, he married his Big Pine Beach sweetheart and love of his life, Nora June Lee at St. Henry’s Church in Perham. They made their home in Perham and raised three sons.

In 1955, he started work at the Perham State Bank, now known as the United Community Bank until his retirement 60 years later in 2015. He was meticulous in his work and enjoyed visiting with everyone who came to the bank. He always had Peanut M&M’s on his desk, a cookie, and a cup of coffee. He could tell you the scores of basketball, baseball, and golf. Well, all sports… He was a Charter Member of the Perham Rotary and was given the Leadership Award for his work in the Perham area. He was highly involved in the creation of the first Perham Hospital.

Jack and June started spending their winters in Florida in 1978 at Errol Estate at the recommendation of family friend “Tuffy” Nelson. They had many fond memories at Errol with residents from Minnesota. They enjoyed having the grandkids visit and playing golf with their sons.

Jack was a passionate family man. His sons and their families were everything to him. Jack enjoyed hunting, fishing, golfing, and watching his grandkids golf. He is well known for his many one line “jackism.”

Preceding Jack in death were his wife June, his daughter-in-law Kathy Cavanagh, and his parents Charles and Gladys Cavanagh.

Visitation will be from 5:00-7:00 p.m. with parish prayers at 7:00 on Thursday, May 13, 2021 at St. Henry’s Catholic Church in Perham. Visitation will resume from 4:00-5:00 p.m. followed by the Funeral Mass at 5:00 on Friday, May 14 at the church. Burial with military honors will follow at St. Henry’s Catholic Cemetery in Perham. Both the parish prayers and Funeral Mass will be live-streamed on this webpage. Masks are required upon entry in St. Henry's Church.