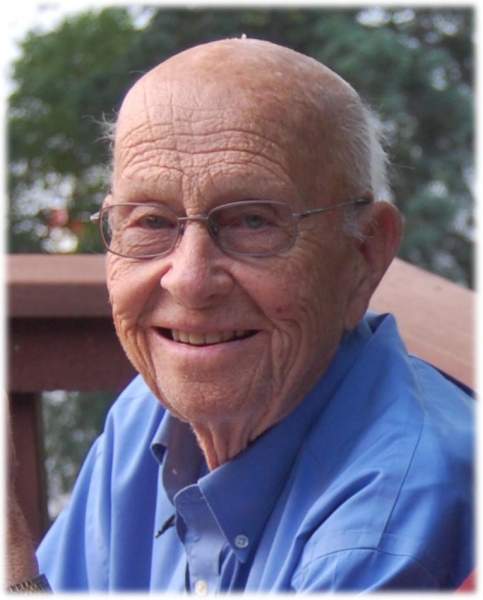 Kermit Larson was an 18-year-old Naval Aviation Cadet in 1943 when he shared a ride on a snowy Minnesota night with a college student named Helen.

He wooed her through the war and after, and they were married in 1948. Their partnership took them from North Dakota to India and Pakistan, where he was stationed as a soil scientist working with the U.S. Agency for International Development, and back to the Midwest, where they built a lakeside home and put down deep roots in Perham, Minn.

He died in Perham on Saturday, with Helen holding his hand, after a year-long battle with leukemia. He was 91 years old.

Known for his broad smile and baritone chuckle, he was a gentle, incorrigible tease. He made friends with just about everyone he met. He was generous, kind and principled. And he was the warm, affectionate center of a large extended family of children, grandchildren, great-grandchildren, cousins, nieces and nephews.

Kermit Elmer Larson was born in 1924 in Albert Lea, Minn., and raised in Northwood, Iowa. His father owned a meat market and grocery store. Kermit enlisted as a Navy Aviator shortly after graduating high school in 1942, and was stationed for training at St. Olaf College in Northfield, Minn., where he met Helen Drovdal, a music major from Arnegard, N.D. Both came from families that had immigrated from Norway and homesteaded in the Midwest.

After the war, with his young wife in tow and a baby on the way, Kermit enrolled at the University of Minnesota on the G.I. Bill, studying soils and agronomy. He graduated in 1950. He was recruited by the U.S. Department of Agriculture Soil Conservation Service and went to work in North Dakota as a soil scientist, conducting county soil surveys. There, he and Helen raised three children. Helen, a music teacher and choir director, taught him to sing harmonies to the Lutheran hymns they both loved.

In the late 1960s and 1970s, Kermit volunteered for two four-year tours in India and Pakistan as part of the Green Revolution, an international effort to introduce high-yield wheat and rice varieties in developing countries where food production was not keeping pace with population growth. He and his colleagues helped local farmers level their land, build tube wells and use fertilizer. Kermit also trained local soil scientists to conduct soil surveys.

He and Helen retired to Perham, where they golfed and gardened (she the flowers, he the vegetables). They were a formidable bridge team. He built dollhouses. She wallpapered them. Each summer, their children and grandchildren arrived for weeks of swimming, strawberry-picking, marshmallow-roasting and story-telling. He taught his grandchildren to fish and to drive stick-shift on his old, red pickup truck. At family reunions, raucous games of cards went late into the night.

Devoted to conservation, Kermit volunteered for Otter Tail County for two decades, collecting water samples from local lakes. He was a longtime member of Calvary Lutheran Church in Perham, where he served as president of the congregation.

With skin tanned and weathered from working decades outdoors, Kermit loved working in his yard. Even in his 90s, he was often outside trimming trees or mowing the lawn with his John Deere tractor.

One of the farmers with whom he had worked in India was named Shisha Singh. Before they met in 1969, Mr. Singh had scraped a living from just a handful of the 22 acres the Indian government had granted him after he fled Pakistan during the partition of Pakistan and India in 1947. With the guidance of Kermit and his team, Mr. Singh planted a new, high-yield wheat variety. His yield multiplied by seven.

In 2005, Kermit and his granddaughter Jennifer Maloney, a journalist, traveled to India and visited Mr. Singh. The Singh family had prospered. In place of their original two-room mud brick house was a two-story, bubblegum-pink house with a portico peering over the other rooftops of the village.

"It is all due to him," Mr. Singh said, grasping Kermit's hand.

In addition to his wife, Kermit is survived by his children—Nancy Larson Maloney of Arden Hills, Minn., Thomas Larson of Aptos, Calif., and David Larson of Sykesville, Md.—as well as seven grandchildren, three great-grandchildren and a loving extended family.

In lieu of flowers, donations may be sent to the Leukemia & Lymphoma Society or to the Calvary Lutheran Church Kermit Larson Gardening Fund.
To order memorial trees or send flowers to the family in memory of Kermit Larson, please visit our flower store.