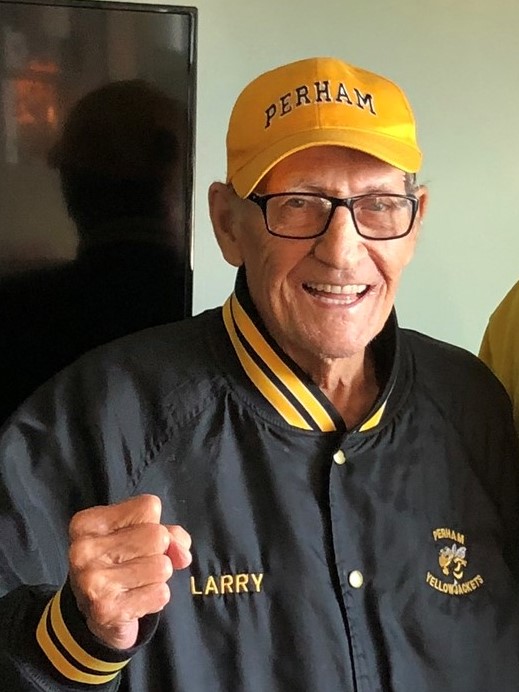 Gone to the great beyond on September 12, 2021, is the soul of Lawrence Anthony Hauer.  He led a long and meaningful life and was a shining example of how to participate in the joys and sorrows of life.  Larry, also affectionately known as “Coach” often said, “I love people. I love to smile, and I love to sing!”

Larry was born March 27, 1927, in St. Paul, MN, to Anastasia (Wycinski) and Victor Hauer. The family moved from St. Paul to Austin and Larry attended Saint Augustine high school -shining as a star athlete in multiple sports, performing on stage in Pirates of Penzance, and wearing the crown of homecoming king.  Larry was not able to attend his high school graduation, however.  He enlisted in the Navy at age 17 and on May 1, 1945, soon after his 18th birthday, the Navy inducted him to serve in WW2.  After a few weeks of boot camp in the Great Lakes, IL and Farragut, ID, the young sailor headed off on Navy mine sweeper YMS 140, bound for US Naval Base Subic Bay, Philippines. His mine sweeper was used to clear a path through the minefields off the coast of Okinawa.

Honorably discharged as a fireman, first class, Larry returned to Austin and attended Austin Junior Community College, also working at the Hormel meat packing plant installing air conditioning in office spaces.  From that vantage point he spied a lovely young secretary named Lee Christie and she became his wife, February 18, 1950.  They moved to Moorhead, MN, then Fresno, CA, and back to Moorhead for college and sports. In college Larry was a  running back and safety in football, guard on the basketball team, ran the 200-400 yard dash in track and also worked part time as a bartender in the Tree Top room of the F-M (Frederick Martin Hotel)  He completed his B.A. degree in bookkeeping and business law in 1955 and the communities of Barrett (‘55-‘56), Sebeka (‘57-‘58) and Perham (’59-85) benefitted from his devotion to a career of teaching and coaching. The gym of the old Perham high school was named in his honor - Hauer Gymnasium.  “Once a Yellowjacket - Always a Yellowjacket”, truly was his motto.  He was forever a promoter of the Perham community as a place to raise a family and we would tease Dad that he would probably bleed yellow and black.

Larry and Lee also operated and enjoyed summer resorting - first at Maple Beach Resort in Blackduck, MN and later, Regnbue Havn in Perham, where customers of 20 plus years continue to return to the resort.  Retirement was never really on Larry’s resume!

Larry and Lee wintered many years in Texas and Florida.  After Lee died in 2007, Larry found another wonderful community at Bahama Bay, Davenport, FL.  He wintered there for 10 years and was dubbed  an honorary Canadian by his friends.

Early morning September 12th caregiver Sheena, at the Hadley House, sat bedside with Larry and family.  Sharing calming love and holding hands, Larry turned his head and said, “Thank you, thank you.”  What a glorious way to run through the finish line!

So quoting his own final words, the Hauer Family acknowledges the vast community of people who have shared the path on this earthly journey with Hauer Dad. We all thank you!  And honoring his legacy, let us carry those words on into our daily lives. “Thank you!”