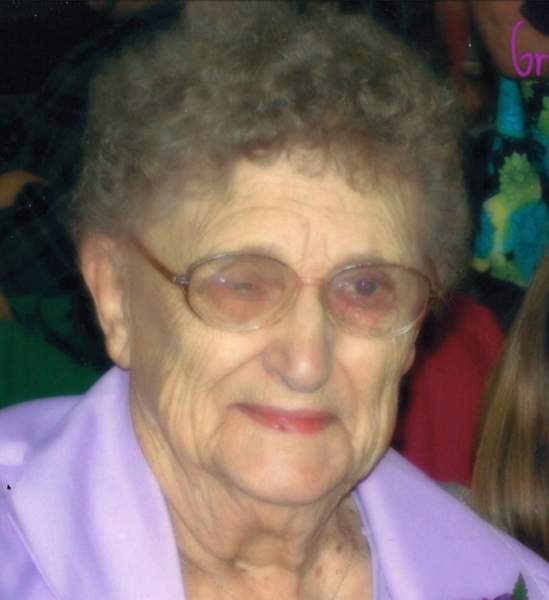 Leona Josephine Betterman, age 100 of Dent, MN passed away Friday, May 12, 2017 in Perham Living. Visitation will be Tuesday, May 16 from 5:00-8:00 p.m. with a prayer service at 8:00 at Schoeneberger Funeral Home in Perham. Visitation will resume on Wednesday, May 17 from 10:00-11:00 followed by the funeral service at 11:00 at Immanuel Lutheran Church in Dent. Burial will be in the church cemetery.

Leona was born May 23, 1916 to William and Minnie (Kloehn) Froemming in Leaf Valley, MN. She was baptized and confirmed at Ebenezer Lutheran Church in Leaf Valley and when she was 15, she became the church organist. She held this position until her marriage. On December 18, 1935 Leona married Elroy Betterman. They made their first home in Miltona Township and then near Lake Ida where they lived for 17 years in which time they had their eleven children. The couple moved to Garfield, MN for four years where Leona taught Sunday school and was a member of the St. John's Ladies Aid. Leona and Elroy then made their permanent home on Tenter Lake near Dent. Leona worked at the Hollow Log Restaurant in Dent for ten years until she retired. She was an active member of the Dent Immanuel Lutheran Church, bible study and ladies aid groups. On September 3, 2001 Elroy passed away at the age of 85. They had been married 65 years. Leona enjoyed cooking, baking, music, cards, games and gardening. She loved visiting with all of her family and friends.

Preceding Leona in death were her parents; her husband Elroy; her daughter Margie Hanson; her three brothers; and one sister. Leona's Memorial Folder
To order memorial trees or send flowers to the family in memory of Leona Betterman, please visit our flower store.