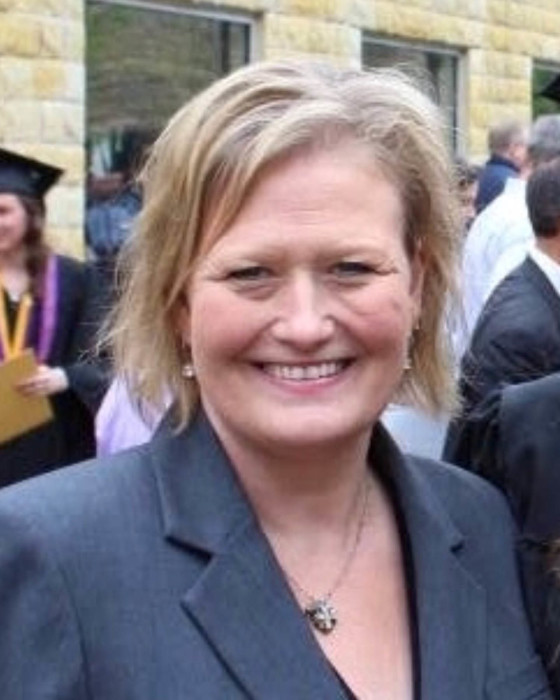 Born February 1, 1968 at Ellsworth Air Force Base in South Dakota, she married the love of her life Mark in 1987. After graduating from Fergus Falls Community College in the same year, they moved to Manitowoc, WI for Mark to begin his career as a pharmacist. Three years later, they moved back to Minnesota and began to make a home in St. Peter. In 1992, Lorie fulfilled her life’s purpose and became a mom with the birth of her oldest and most passionate child Katrina and two years later welcomed the ever-beautiful and ambitious Maria. In 1998, Joseph, the largest baby known to man put Lorie on bed rest for 21 weeks and completed the family. In order to be closer to her children day-to-day, she started working at John Ireland School as the school cook. While officially the cook, she was also influential in building the school playground and a party scene at ‘Luck of the Irish’ to get the new school off the ground. In 2001, Lorie began working at Gustavus Adolphus College in the Admissions Office before finding her passion and calling in Marketing and Communication. It was her joy and honor to work with countless students as a mentor, a friend, and naturally, a mother. She loved the events, Christmas in Christ Chapel and the Nobel Conference, but more than even these, she loved her co-workers. These men and women lived the joys, stresses, triumphs and struggles with her each day and were there for her when she needed them most.

Faith and family were the most important facets of life for Lorie. She lived her relationship with Christ through devoted friendships at the Catholic Church of St. Peter. When Katrina studied abroad in Rome, Lorie traveled across an ocean to see the Vatican with her. There were few soccer games Lorie and Mark missed as Maria excelled as a Duhawk at Loras College. It was a source of abundant pride when her beloved only son Joseph became a Gustie himself. She was able to enjoy dinner with him regularly and conversations with him between classes daily. Mark and Lorie loved taking trips to the cabin on Little Pine Lake, going on walks with their dear dogs, and gathering friends and family for meals and drinks. With the time she had here, she loved her family and her friends with her whole life.

Preceding Lorie in death was her brother Lawrence Jr. and her father-in-law James Siebels.

In lieu of flowers, memorial gifts for the family may be made online at www.gofundme.com/loriesiebels

Lorie's Memorial Folder
To order memorial trees or send flowers to the family in memory of Lorie Siebels, please visit our flower store.