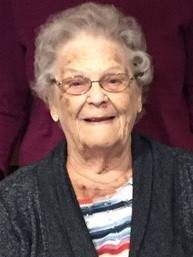 Lorraine (Reller) Engel passed away Wednesday, March 24, 2021, at Fargo Hospice House, after a short illness, two days shy of her 93rd birthday.  Lorraine was born in Minneapolis on March 26, 1928, one of three daughters to parents, Ben and Anna Reller.  At the age of two, the family moved to Waubun.  In her teen years, Lorraine worked cleaning houses, babysitting and other chores for families.  Lorraine was a cheerleader all of her high school years, and  she graduated from Waubun High School in 1946.

After high school, Lorraine attended cosmetology school and started her first job at O’Mearas Beauty Shop in Fergus Falls, on April 1, 1948.  She met Cordes Engel in Fergus Falls and they were married in Waubun on May 30, 1953.  She, a city gal, moved to the country and raised cats, dogs, and kids in rural Dent, MN.  Every summer she tended a huge garden and raised six children.

In 1971, the family moved to Thief River Falls, MN, where Lorraine made friends playing softball and was a member of  Newcomers Club and TOPS.  In 1987, Lorraine and Cordes returned to the Dent area, residing on Star Lake, where they spent their retirement years fishing, taking long drives checking out the crops and looking for deer, going for coffee with friends, handing out treats to the neighborhood dogs, and keeping the hummingbird feeders filled with jelly. Lorraine was a good cook, and her family loved her cinnamon rolls and fried fish.

Besides enjoying the nature of the Star Lake area, Lorraine enjoyed sewing, crocheting, jigsaw puzzles and reading.  Lorraine was an active member of Sacred Heart Catholic Church, Dent, and helped every summer with the annual bazaar.  She enjoyed spending time with her adult children and their growing families.  Every summer, her granddaughters would ask her to show them her dead bird carcasses she stored in her freezer, casualties of the picture window.

The last four years were spent at Perham Living, where she enjoyed playing Bingo, answering the Trivia questions often before the entire question had been asked, listening to the Country Classics music station, and visits from her family.  Lorraine enjoyed her time there, often telling her family regarding the staff ‘the girls take good care of me’.  Thank you to the staff and volunteers at Perham Living/Prairie Knoll for making her time there comfortable and welcoming to her family.

The family extends a heartfelt Thank You to the facility and staff at Fargo Hospice House for creating a special place for our Mom and family to gather, reminisce and support our Mom and each other in those last days.

A private family funeral mass will be held with burial at Pleasant Hill Cemetery, Dent.  Memorials may be made to Sacred Heart Catholic Church, Dent.  Condolences may be sent to the funeral home. Lorraine's Memorial Folder
To order memorial trees or send flowers to the family in memory of Lorraine Engel, please visit our flower store.