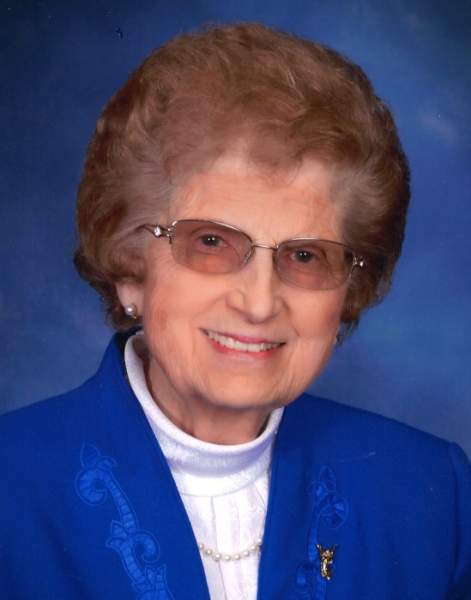 Lu attended primary school at Rose Hills School, a one room school house two miles from the farm she grew up on in Dent. She then attended Perham High School from grades 8 to graduation where she was an honor student and a member of the girls basketball team. In choir, she met her future husband Roland “Rolly” Knuttila. They were married November 7, 1949 at St. Stanislaus Catholic Church in Perham. Rolly and Lu were married for 62 years until Rolly’s passing on January 3, 2013. They resided in Perham for the rest of their lives where they raised their seven children: Marcia M. Knuttila of Thief River Falls, Steven R. (JoAnne Thibodeau) of Rose Lake, Gary J. (Kristine L. Frank) of Dead Lake, Jeffery C. (deceased), Glenn A. of Perham, Jon Eric (deceased) and Lynee M. Knuttila of Thousand Oaks, CA.

During their marriage, Rolly and Lu loved to travel. They had many family road trips across the country as well as trips to Hawaii, Europe and Mexico. Lu’s active lifestyle also included weekly bridge club with her dear friends and many nights of couples dancing and weeks at their lake cabin on Rose Lake. The cabin brought the whole family together in the summer. Together they played water sports and pinochle late into the evenings. Lu’s niece and nephews along with their families joined often and Lu loved them all dearly.

Lu enjoyed her ten grandchildren and 20 great-grandchildren playing all year round with her; all of whom adored Grandma Lu. During the winter months there were many snowmobiling trips with family and friends.

Lu and Rolly’s children all attended St. Henry’s Catholic School where the family became church members. Lu became very involved with the Christian Mothers and Catholic Daughters. She was elected president of Christian Mothers for a term. In the following years, Lu was elected the Regent of Catholic Daughters Court St. Rita. After that term, she was appointed as District Deputy for Court St. Rita of Perham, Court St. Cabrini of Fergus Falls and Court St. Justin of Mahnomen. Lu served as their advisor and director. She presided at the installation of officers, reception of new members and conducted the workshops for these courts. In 2018, Lu was honored for her more than 50 years of service in Catholic Daughters of America.

Lu served on the school board at St. Henry’s Catholic school and was also a member of the Parish Council. She taught CCD for many years and was also a lector for Masses.

Lu is lovingly remembered by children as a supportive, active, beautiful, spiritual, perpetual guardian light of their lives who taught them to love unconditionally and never give up hope.