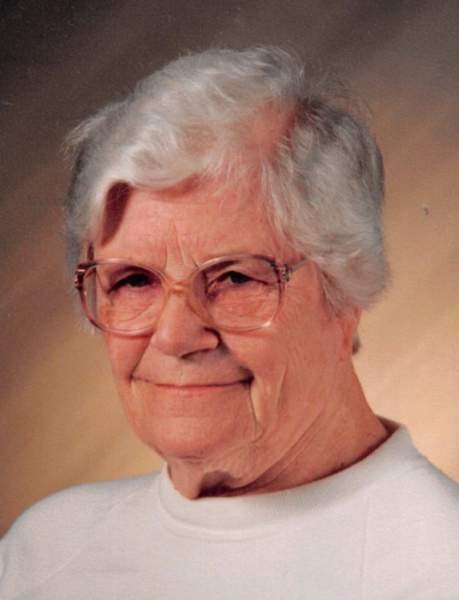 Maggie Siebels was born September 18, 1912 to Henry Edward and Christina (Bahner) Siebels, the ninth of twelve children.  Her given name was Magdalena Theresa Siebels.  She went to school at District 158 in Gorman Township.  Working on the farm, Maggie could keep up with any of the men.  Quite a few years she helped other households including her sister, Frances and other cousins.  In 1950, Maggie and her brother Al moved to Fargo.  They both had a place to stay and jobs the day they arrived.  Maggie started at St. John’s Hospital and continued there for 42 years.  During some of these years, Maggie was the assistant house mother at the school of nursing across the street from St. John’s.  Maggie enjoyed quilting as a hobby giving many to the church for raffles.  Her church involvement at St. Anthony’s in Fargo meant the most to her.  She was known as the rosary lady because she led it year in and year out.  Maggie sang in the funeral choir and did a lot of mission sewing.

In 1996 Maggie moved to Perham Living.  She continued to share her music in the Quarternotes singing group and the Tone Chimes handbell group.  Maggie was able to continue her Mass attendance and rosary at the home.  She liked to share her life stories.  More recently she spoke more German than English!  Maggie will be remembered for her sense of humor and the quick answers to just about anything said to her.