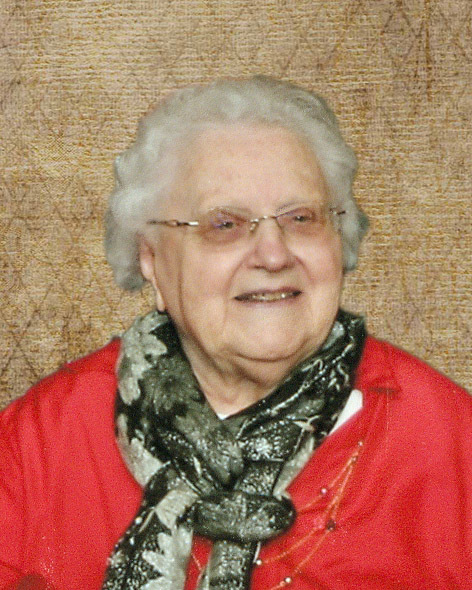 Mariana "Marion" Stephania (Skibitzki) Bucholz was born December 25, 1923 to Bert and Barbara (Dulski) Skibitzki and passed away on May 5, 2016 at Perham Living.

Marion was the fifth of six children and was baptized on December 26, 1923 at St. Stanislaus Parish in Perham, MN. She attended grade school in Corliss Township, District 204, grades 1-8 and graduated from Perham High School in 1942.

On February 12, 1945 Marion was united in marriage to James J. Bucholz at St. Stanislaus Catholic Church. They farmed near Little Pine Lake for 25 years. James died in 1971. During their 25 years of marriage they had five children: Larry (Charlotte), Ronald (Judy), Donna (Joseph Fritz), James (Marciel) and Daniel (Andrea) all residing in Perham. Marion had 17 grandchildren and 16 great-grandchildren.

After farming, Marion worked as a teacher's assistant and secretary/clerk for the Perham School District until 1988 when she retired. Upon retirement she volunteered, gardened and enjoyed spending time with her family. After moving off the farm, she moved into Perham and lived near St. Stanislaus. Years later she sold her home and moved into Briarwood. She spent the last year at Harvest Glen in Perham Living. Marion enjoyed word search puzzles, solitaire, dominoes, bingo and playing cards.

Marion was preceded in death by her parents; her husband; four sisters; one brother; one grandson and one great-granddaughter.

Marion will be deeply missed. In lieu of flowers, memorials are preferred to St. Henry's Area School.

To order memorial trees or send flowers to the family in memory of Marion Bucholz, please visit our flower store.