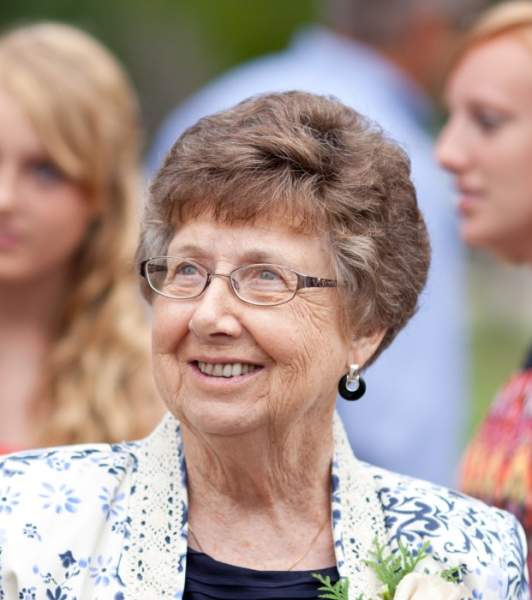 Marjorie Ruth Smith was born December 5, 1930 in Vining, MN, the daughter of Sankey and Alma Peterson.  She grew up in the Battle Lake, MN, area.  Marge started taking piano lessons at the age of 5 which began a lifelong love of music.  Marge graduated from Battle Lake High School in 1948.  After graduation, she attended teacher's training in Fergus Falls, MN, after which she taught in a one room school until she returned to school at Moorhead State Teachers College.

In 1952, Marge met Virgil Smith through mutual friends.  She continued teaching at Detroit Lakes, MN.  Marge and Virge were married June 26, 1954, in Battle Lake, MN.  They made their home on Virgil's home farm where they farmed for a few years before settling into their current farm in Star Lake township.  They started their family and were blessed with three children, Greg, David and Linda.

Marge returned to college at Fergus Falls Community College and Moorhead State University in 1969 graduating with a bachelor's degree in elementary education in 1971. She then began a 25-year teaching career in the Underwood MN school district teaching mainly 2nd grade. She retired in 1996.

Marge was very active in the Dent United Methodist Church teaching Sunday School, singing in the choir and as a member of the United Methodist Women.  She also was the church organist for 20 years.  She enjoyed playing the organ and singing at many weddings through the years.  Marge also enjoyed the exercise class and the friends she met there.

Marge was a member of the Dent Garden Club for many, many years.  Flowers and birds were two things that brought her much joy.  The activity that brought Marge the most joy was being with family and friends old or new.  She loved to visit whether on the phone or over a cup of coffee.  Being with people young and old was what Marge found to be the most rewarding.  Marge and Virge also enjoyed traveling after Marge retired from teaching.  Their trip to Norway was especially meaningful due to Marge's Norwegian heritage.  Marge also enjoyed spending time at the lake cabin they built on Clitheral Lake with friends and family.

Survivors include her husband of 64 years, Virgil Smith of Dent; sister Lucille Eckhardt of Fergus Falls and her three children, Greg Smith of Sabin, David Smith of Dent and Linda Snell (Shannon) of Alexandria; grandchildren Brittany Smith of Colby, KS, Andrew Smith (Jana) of West Fargo, Kimberly Snell of Moorhead, Carly Snell of Ithaca, NY and one great-grandchild, Jack Smith of West Fargo, along with many nieces and nephews. Marjorie's Memorial Folder
To order memorial trees or send flowers to the family in memory of Marjorie Smith, please visit our flower store.