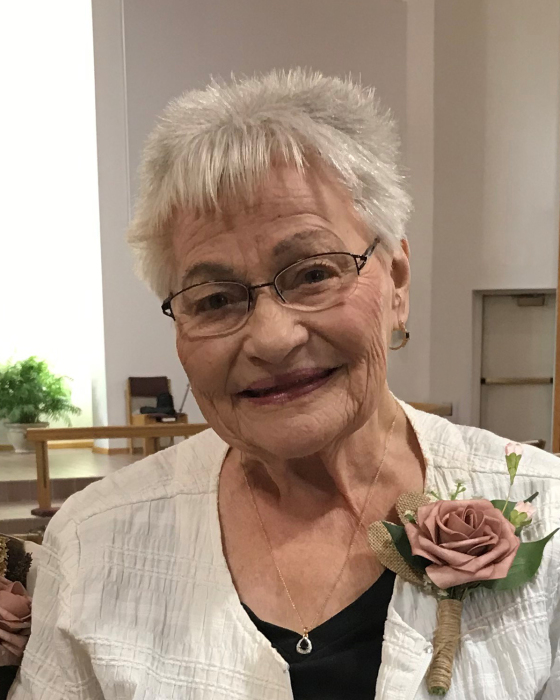 Marlys Betty Peterson went home to Jesus on January 2, 2022 at 1:01 p.m. She was the youngest child of Andrew and Anna (Pederson) Hanson. She was born November 5, 1938 at her Aunt Cina’s home in rural Pelican Rapids, MN. She grew up on Star Lake in Star Lake township near Dent, MN. Marlys was baptized and confirmed at Bethel Lutheran Church in Pelican Rapids. She attended rural country school until she went to Perham High School where she was a cheerleader and participated in drama graduating in 1956. Then she attended Concordia College in Moorhead, MN and earned a teacher’s degree allowing her to teach at several one room schoolhouses in rural Minnesota. She also worked at Dent Elementary School as a teacher’s aide and substitute teacher. Later in life she worked at Fergus Falls State Hospital, the turkey plant in Pelican Rapids and the Pelouski Group Home.

Marlys was married to Ronald Drayton in 1957 and they had three daughters: June, Jean, and Joan. She married Clarence O. “Pete” Peterson Jr. in 1965 and had two sons: James and Jon. She was known for her piano playing for which she was self-taught and played by ear. If you could hum the song, she could play it! As a family we spent many enjoyable times around her as she played the piano and sang. She also played the accordion, guitar, and harmonica. The family gathered with her at Star Lake where she loved to fish. She lived on the home place until 2014, then moved to Perham. She loved being with her family and spent precious time with them. Marlie raised a large garden and canned many foods, baked homemade bread, donuts, and lefsa that were community favorites. No one went hungry around Marlie!

She loved her Lord Jesus Christ which was visible through her daily bible study and her support of many Christian charities. Her greatest wish was that all her family and friends know Jesus and become born again so that they all have eternal life and reunite in Heaven.

You could always count on her to be there for you and she would help anyone in need.

To summarize her life in two words: Faith and Family!

Visitation will be from 5:00-8:00 p.m. with a prayer service at 7:00 on Thursday, January 6 at Schoeneberger Funeral & Cremation Service in Perham. Visitation will resume beginning at 10:00 a.m. followed by the funeral service at 11:00 on Friday, January 7 at Crosspoint Alliance Church in Perham. Interment will be in St. John’s Lutheran Cemetery of Dora Township, rural Dent.

Marlys's Memorial Folder
To order memorial trees or send flowers to the family in memory of Marlys Peterson, please visit our flower store.