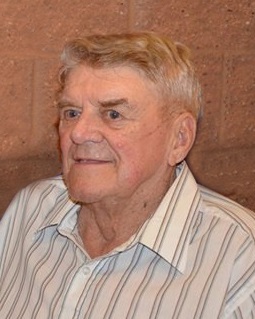 Marvin Robert Herman Walk, 79, of Ottertail, MN, passed away on Tuesday, February 11th at Perham Health. Marvin died in the community where he was born, raised and spent his entire life.

Marvin married his wife Marie in 1964 and settled in rural Ottertail where they raised their four children. Marvin worked as both a bookkeeper and a car salesman as well as helping farm his parent's farm for the bulk of his career, finally retiring in 2001. Marv and Marie lived a simple life seeming to always get by, providing for the needs of their family. He loved to hunt and travel throughout the state with his son, Mike, who lived with them until his death in 2006. To keep active, Marv enjoyed both raising vegetables and cutting wood. Many people benefited from Marv's vegetable hobby. Marv's life took a sudden downturn in 2007 when he suffered a stroke while out cutting wood. The Marv that was known and loved by his family never fully returned after that. His final years after the stroke were met with constant rehab and therapy until his final months when illness seemed to strike him repeatedly. The simple pleasures that Marv was able to enjoy through his last years included bird watching and mowing his lawn on his garden tractor.

Marvin is survived by his wife, Marie; son, Matthew and wife Jennifer with children Hayley, Brynne and Aaron of Albertville, MN; son, Manny and wife Deborah with children Rebekah, Isaiah and Leah of Crystal, MN; and daughter, Melissa with husband Chad Rockvoy of Eagan, MN. Marvin is also survived by sister, Myrtle Hinz of Bismarck, ND; sister, Marcella with husband Mick Lawson of Wadena, MN; brother, Melbourne with wife Mary of Ogema, MN; and sister-in-law, Carolyn Alberts of Ottertail, MN; along with numerous nieces and nephews.

Marvin is preceded in death by his parents, Robert and Ida; son, Michael; brothers, Merle Walk and Alfred Alberts.

Funeral services will be held at 11 AM on Saturday, February 15th at Richville United Methodist Church with viewing 1 hour prior to the service. Visitation will be held from 5 PM until 8 PM on Friday, February 14th at Schoeneberger Funeral Home in Perham.
To order memorial trees or send flowers to the family in memory of Marvin Walk, please visit our flower store.