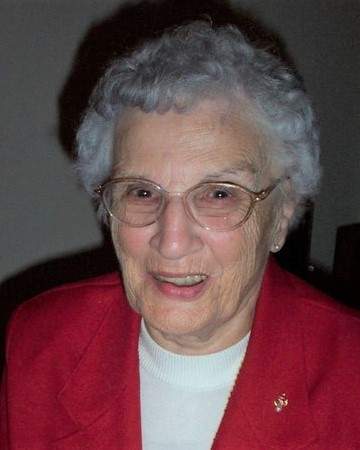 She was born October 5, 1923 in Providence RI, daughter of Herbert Earl Morgan Medbery and Dorothy Bushnell Peck Medbery, who both preceded her in death. She is also preceded in death by her sisters Ann and Ruth, her brother Herbert, and her nephew Bill. She is survived by nieces Christine Jenkins, Valerie Matthews, and nephews Ron and Russ (Shirley) Bunker.

Mary attended John Howland School (K-6), the Lincoln School (7-12), and then Katherine Gibbs Secretarial School. After Katherine Gibbs, Mary was employed at Amica Insurance from 1942-1983, eventually becoming one of the heads of the Personnel department there. Mary served her country in the USNR (WAVES) from 1943-1946, being discharged as a Yeoman 2nd Class.

After all Mary’s family had passed away out east, she came west to Minnesota to be near her nephew Russ in Perham where she lived for about 20 years. Mary always had a smile for everyone and had such a Christlike giving heart. Well done, Mary, good and faithful servant. You will be so missed here on earth by your family and friends here in the Perham Minnesota area, as well as all the friends you left out in Rhode Island including Betty Lonergan, who faithfully called Mary every week for years without fail.

A memorial service will be held at 11:00a.m. on Friday, January 29, 2021 at Calvary Lutheran Church in Perham. Masks and social distancing are required. Interment will be at Highland Memorial Park in Johnston, RI at a later date.

In lieu of flowers, memorials are preferred to St. Jude’s Children Hospital. Mary's Memorial Folder
To order memorial trees or send flowers to the family in memory of Mary Medbery, please visit our flower store.