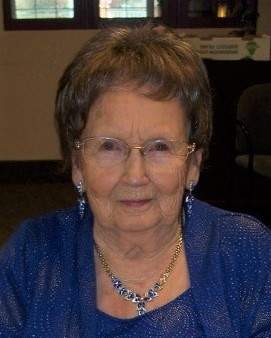 Phyllis Kawlewski Houge, age 93, died Saturday, April 20, 2019 in Perham Health. Visitation will be from 5:00-7:00 p.m. with a prayer service at 7:00 on Friday, April 26 at Schoeneberger Funeral & Cremation Service in Perham, MN. Visitation will continue from 12:00-1:00 p.m. followed by the funeral service at 1:00 on Saturday, April 27 at Schoeneberger Funeral & Cremation Service. Chaplain Pam Logan will officiate. Burial will be in the Perham City Cemetery.

Phyllis was born on September 3, 1925, to John Bernard and Lillian (Lillis) Gladback in Dead Lake Township. She grew up on the farm and attended country school through eighth grade. Phyllis was united in marriage to George Kawlewski on June 1, 1947. They made their home in Rush Lake Township where they farmed until George's death in June of 1988. During those years, she was a very hard-working farm wife and mother. Family gatherings were a very important part of their lives, as well as time spent with friends, music, and dancing.

After George passed away, Phyllis continued to live on the farm. She loved flower gardening, walks to the lake, her dog Snow, and her cat Toby. She treasured time with her family, especially her grandchildren and great-grandchildren, which brought her so much joy. She enjoyed traveling, going to dances, and even joined a square dance club.

On December 14, 1996 Phyllis married Jordan M. “Mike” Houge. They enjoyed traveling together. They moved from the farm to Perham in 2007. Because of failing health, they both moved into nursing homes in 2012. Mike passed away in 2013.

Phyllis was preceded in death by her parents and her siblings Audrey Lillis, Roma Lenhart and Milo Gladback.