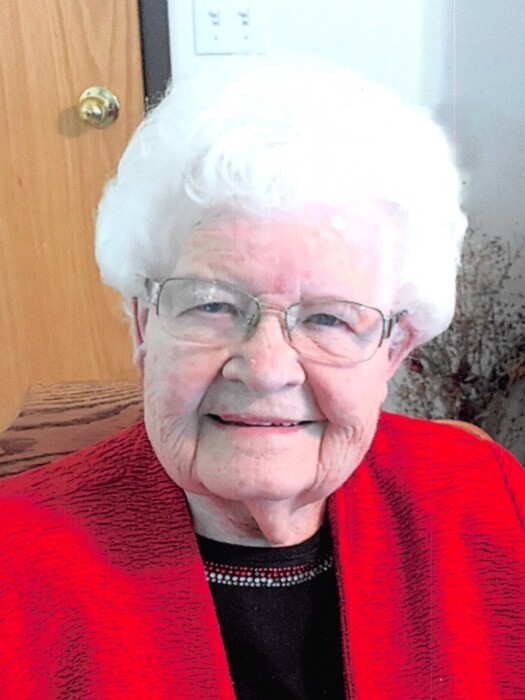 Phyllis Marilyn (Carlson) Sucher, age 96 of Perham, MN passed away Wednesday, October 13, 2021, in Perham Living. She had been a resident there for the past five months. The memorial service will be Saturday, October 30 at 11:00 a.m. at Calvary Lutheran Church in Perham with a visitation from 10:00 – 11:00 a.m. Private burial will be at Calvary Memorial Cemetery near Perham.

Phyllis was born to Carl L. and Dorothy (Palmgren) Carlson on January 31, 1925, in Jamestown, NY. She started kindergarten at the age of four and graduated with honors from Jamestown High School in 1942. She worked at the National Chautauqua County Bank and then left for a two-year course at Lutheran Bible Institute in Minneapolis. She met the love of her life, Melvin R. Sucher in the fall of 1945 at a wedding of good friends. She then enrolled at Gustavus Adolphus College in St. Peter, MN but that was interrupted by Melvin’s ordination into the Lutheran Church on June 8, 1947. Three weeks later, Phyllis and Melvin were married on June 29, 1947 in Jamestown, NY.

Phyllis was a person of great talents, especially music, which certainly was beneficial for a Pastor’s wife. She played the organ, piano, sang solos, directed several choirs, and taught many years of piano lessons. Together, Phyllis and Melvin served churches in Bear River, Warren, Benson, rural Lanesboro, and Clarks Grove, MN. They retired to Story City, Iowa and lived there for several years when they finally made the move to Perham, where they lived up to the time of their deaths. Wherever she lived, Phyllis was involved in her church, not only with using her musical talents but teaching Sunday School and being a part of a circle and WELCA. Quite often I heard her say that they asked her to lead the bible study again the following week too. She was a woman of strong faith and she liked to share her faith with others and was an active member at Calvary Lutheran Church. Phyllis and Melvin were a strong two-some and were admired for their strong convictions and their constant and abiding love for each other and their family. Phyllis loved to meet new people and share stories with them. Sometimes they found they knew the same people. What a small world it can be. It didn’t take long for them to become friends too!

During their later years, they loved to host tours around the world and of course Phyllis’s favorite place was Sweden being she was 100% Swede! Phyl and Mel also enjoyed their 25 years spent during the cold Minnesota winters in Mesa, Arizona. Of course, they found out she played the piano, so she was asked to accompany the choir in their park as well as other small groups. She even played in a small band and loved to tell people she got to play waltzes and polkas for a change. The family felt she needed her own piano in Mesa, so she received a piano as a special surprise on her 90th birthday. It even fit into their mobile home!

Phyllis grew up with a father that loved sports and that tradition continued with her life with Melvin. She kept score for the baseball games whether it be the Twins or Melvin’s favorite team, the Yankees. You did not interrupt her during the middle of the game. She also enjoyed watching their grandkids and great grandkids play different sports. She would get a few games of cards played as well. She was well known for her wit and great sense of humor. She was a good storyteller and made people smile and laugh easily.

Blessed by the memory of Phyllis Sucher who is loved and cherished by many family and friends.

In lieu of flowers, memorials may be given to Calvary Lutheran Church in Perham.

Phyllis’ Memorial Service will be live streamed and available for viewing at: https://www.schoenebergerfuneralhome.com/obituary/Phyllis-Sucher Phyllis' Memorial Folder
To order memorial trees or send flowers to the family in memory of Phyllis Sucher, please visit our flower store.