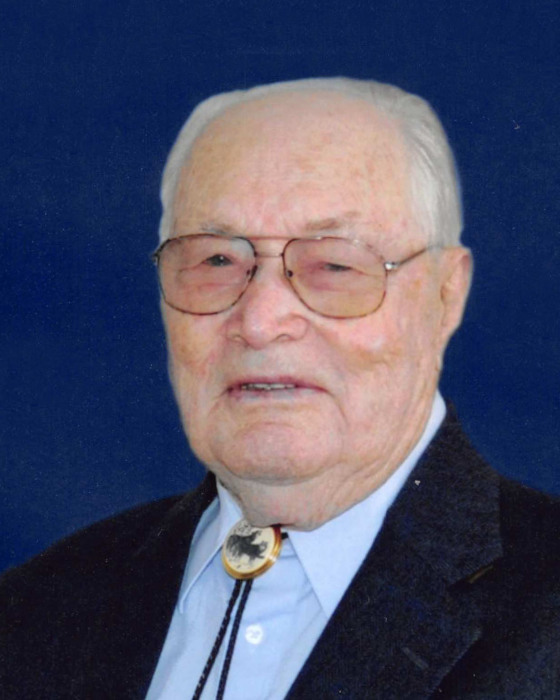 Raymond Irvin Alberty was born on May 13, 1919 in Marcus, IA and passed away Tuesday, September 4, 2018 in Perham, MN. Born to the late George and Margurite (Goodburn) Alberty, this quiet natured man grew up on the farm. After high school, he attended American Technical School in Des Moines, IA for Aircraft Sheet Metal. He worked at Lockheed Aircraft Corp. of Burbank CA, working on the final assembly of P-38s, covering framework with sheet metal; a job of which he was very proud. He married Coral Loretta-Mae Krumbach in Nevada on October 11, 1941. To this union they were blessed with twin girls and a son.

He was drafted into the Army in 1944. He was an ammunition bearer, supplying a squad with .30 caliber machine gun ammunition and trained in the operation of said weapon. He also had experience driving military vehicles up to 2 1/2 tons on all types of terrain, and making minor repairs on the vehicles when needed. He served with the 27th Infantry in Luzon. He was awarded with the Philippine Liberation Ribbon.

He farmed in Parker SD about 10 years before moving his family to Ottertail, MN in 1956, where he worked for Rush Lake Lumber Co. Later he and a business partner purchased the company. In later years, he married Jean Mclntire, gaining four stepchildren.

He really enjoyed having children around and was particularly proud of being a great-great grandpa. He was especially fond of spending time with family and friends who will all miss the quiet and steady presence of his tenderhearted spirit.

He is joining his first wife Coral and their daughter Sondra, his second wife Jean, his parents George and Margurite, and his siblings, Orville Alberty and Mary Wright.

He will be laid to rest beside his wife Coral, in Parker SD.

The Celebration of Life service with be held at 11:00 a.m. at Perham United Methodist Church on Saturday, September 15, 2018. Visitation will be at the church one hour prior to the service.

To order memorial trees or send flowers to the family in memory of Raymond Alberty, please visit our flower store.