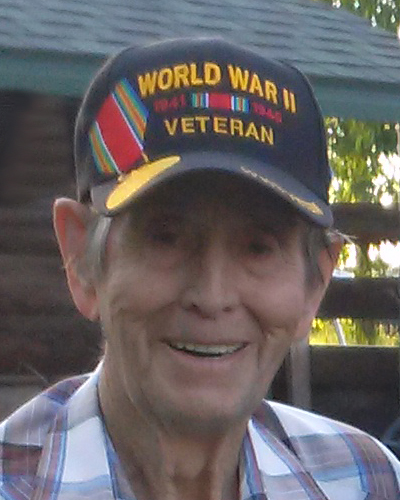 Bob was born August 14, 1925 in Madison, MN to Alva and Hazel (Hersom) Lamm. He attended grade school through the 5th grade and at the age of (barely) 17 enlisted in the U.S. Navy on October 6, 1942. Bob spent three years, four months and 29 days in war time service and was honorably discharged on March 4, 1946 as a Gunner’s Mate, 3rd Class. He served aboard the USS Natoma Bay (CVE 62) with combat operations including the battles for Majuro, Leyte and Okinawa. Bob was united in marriage to Evelyn Delores Moen on November 3, 1946.  Together they had four sons.

Bob enjoyed farming with his wife and sons on the farm they bought in 1959 near Vergas. Within a year of the purchase of the farm he began rebuilding and remodeling every building for the sole purpose of functioning as a dairy-only farm operation. In addition to dairy farming, he performed auto body repair, mechanical repair of automobiles, tractors and just about anything his neighbors brought him to fix. He built his own bale conveyor systems, barn cleaner and many gadgets to do what needed to be done on the farm as well as some important things like a homemade motorbike for the boys.  Bob also enjoyed woodworking and built many beautiful tables, china hutches, cabinets and keepsake items that will endure and speak as a legacy of his many talents and self-taught skills.

While he rarely spoke of it until the last couple years of his life, Bob was very proud to have served his country in a time of war and was determined to “make it on his own.” His philosophy was that of those who made it through the great depression: “use it up, wear it out, make it do, or do without.”

Bob was preceded in death by his parents; his wife Evelyn; his brothers Harold (Mavis), Luther (Maxine), Ralph (Genny) and Manford (Gigi); and his sisters Alice (Pete) Porter and Valma (Ray) Taylor.

Bob will live on in our hearts and be remembered as one our country’s “Greatest Generation.” Robert's Memorial Folder
To order memorial trees or send flowers to the family in memory of Robert Lamm, please visit our flower store.