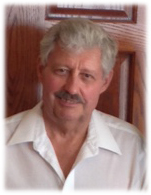 Pete was born February 8, 1943 in Sioux Falls, SD and was raised on the family farm in Richville, MN on Dead Lake. He attended country school until high school where he graduated from Perham High School in 1960. Pete enlisted in the North Dakota Air National Guard serving overseas in Japan and being stationed in Anchorage, AK, in 1964 during the big earthquake. He was married to Sharon Brekke in 1967 and together they had two children. They later divorced. Pete retired from the Happy Hooligans in 2001. He spent many weekends at his cabin on Dead Lake and had a big place in his heart for animals; feeding stray cats and adopting older dogs from shelters.

Preceding him in death is his father, Donald Larsen.
To order memorial trees or send flowers to the family in memory of Ronald Larsen, please visit our flower store.