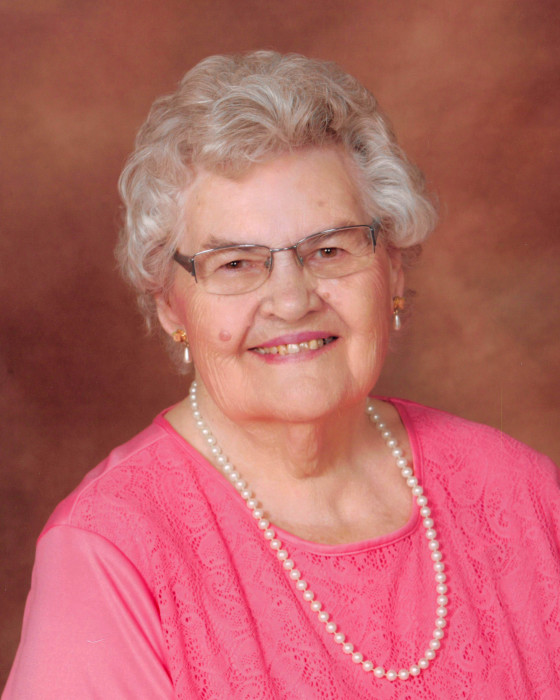 Ruth Doris (Harms) Steuber, age 95 of Perham, Minnesota died March 30, 2020. Ruth was born August 28, 1924 at Gettysburg, South Dakota to Peter and Grace (Sites) Harms, the sixth of nine children. The family moved to Pine Lake Township near Perham in 1935. In 1940, Ruth was involved in a car/train accident where her brother, Arthur died from his injuries.

After graduation from Perham High School in 1943, Ruth worked in Minneapolis. She later met and married Oscar Steuber in 1950 at St. John’s Lutheran Church of Corliss Township. The marriage was blessed with five children. The couple farmed in Corliss Township until 1981 when the farm was sold to Eric and Vida Steuber. Ruth worked at West Central Turkeys in Pelican Rapids and Frazee. Later she worked at Tuffy’s Pet Foods until her retirement in 1987. Ruth had a very strong faith and was active in her church. She was involved with St. Paul’s Concordia Guild. She kept records on the cradle roll and the servicemen. Ruth also was active with the Perham Senior Center, keeping the books for many years. Ruth loved visiting with family and friends, playing cards and board games. On December 19, 2015, Ruth suffered a major stroke. She then moved to Perham Living where she resided until her death.

Ruth was preceded in death by her parents; Oscar in 2005; daughter Eileen Brown in December 2002; grandson Adam Blake in September 2013; and all her siblings: brothers Chester, Arthur, Lloyd and William; and sisters Mildred Davis, Hildred (Hap) Weum, Marjorie Paesler and Inez Petty.

Ruth was laid to rest at St. Paul’s Lutheran Cemetery in Perham. Ruth's Memorial Folder
To order memorial trees or send flowers to the family in memory of Ruth Steuber, please visit our flower store.