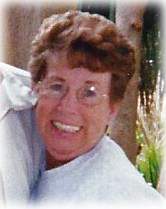 Sandra A. Sazama (Wolff), age 72 of Minneapolis, MN passed away peacefully with her family by her side Thursday, September 10, 2015 in University of Minnesota Medical Center, Fairview. A memorial service will be held on Friday, September 18 beginning at 2:00 p.m. at Schoeneberger Funeral Home. Visitation will be held one hour prior to the service at the funeral home. Deacon Randy Altstadt will officiate. Burial will be held in St. Stanislaus Catholic Cemetery, Perham.

Sandra is survived by her loving husband of 54 years, Michael; her son, Jeffrey (Kelly) of Lakeville; her daughter, Bonnie (Doug) Knott of Albertville; six grandchildren; one great-grandchild; and her sisters, Marlene (Bob) Bentley and Shirley (Neil) Ramberg.

Preceding Sandra in death were her parents, Neva Ditterick (Larson) John; her son, John; and her sister, Mona Schwanke.

She will be greatly missed by all.
To order memorial trees or send flowers to the family in memory of Sandra Sazama, please visit our flower store.