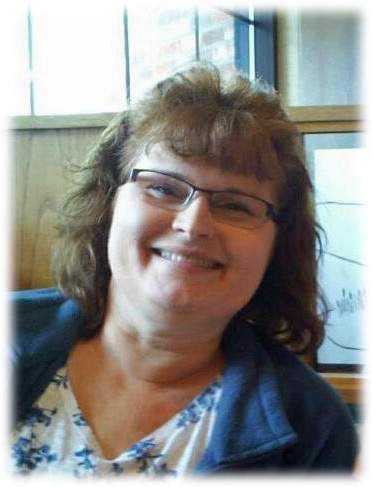 Susan Emma (Ulschmid) Lundgren, 57, of Perham, MN passed away on Monday, February 24, 2014 at Sanford Health in Fargo, ND. She was born in Perham, MN on December 10, 1956 to Ramona (Blauert) Ulschmid and the late George Ulschmid Jr. of Frazee, MN. She grew up on her father's farm in Frazee, MN, the third of seven children. She leaves behind these beloved siblings: Debra (Roger) Engstrom, Joel (Julie) Ulschmid, Jeff (Diane) Ulschmid, Loran (Lena) Ulschmid, Larry (Linda) Ulschmid, and DeeAnn (Glen) Schaefer. She loved all of her siblings very much and they gave her many nieces and nephews that she loved, also.

After graduation, she worked as a secretary at Frazee High School where she met her husband of 37 years, Dwight Lundgren. They were married on October 3, 1976 and completed their family with two daughters, Sarah Lundgren of Hawley, MN and Rachel (Brian) McLemore of Jasper, AL. She was a devoted and loving mother and wife. She made a beautiful home for her family in Perham and helped to provide for them working at United Community Bank. She worked there for 27 years, starting as a proof operator and ending her career there as the data processing officer. Susan developed many life-long friendships within United Community Bank.

Her family extends beyond those she was related to. She worked her way into the hearts of her co-workers and even the friends of her children. There were many people who called her 'Mom' aside from Rachel and Sarah.

Susan was an incredibly strong and devoted woman, strong in her faith with a youthful sense of humor that was absolutely infectious. Her laugh was unforgettable; as it was often so full of joy that it took her breathe away. She loved to share it with her grandchildren whom she sadly leaves behind: Daniel, Jack, and Emma McLemore. They were the light of her life and brought out the giddy and playful little girl that was always inside her heart.

Susan was diagnosed with breast cancer in 2009 and bravely won that battle in 2010. Sadly, the cancer returned and was found in her bones in 2012, this battle was hard fought, but couldn't be won. She will be greatly missed by the ones who loved her, as she was such a pillar of strength to them all. She is preceded in death by her father George Ulschmid Jr. and her grandparents.

Funeral Service: Saturday, March 1, 2014 at 11:00 AM at St. Paul's Lutheran Church in Perham
Visitation: Friday, February 28, 2014 from 4:00-8:00 PM with a prayer service at 7:00 PM at Schoeneberger Funeral Home in Perham. Visitation will also resume one hour prior to the funeral at the church.
Burial: St. Paul's Lutheran Cemetery – Evergreen, rural Frazee, MN.
To order memorial trees or send flowers to the family in memory of Susan Lundgren, please visit our flower store.