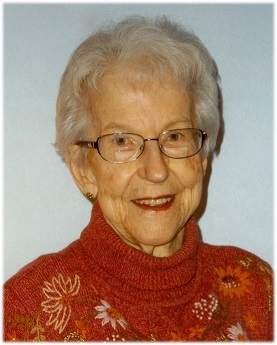 Susan Ruether, age 95 of Perham, MN passed away Monday, July 28, 2014 in Perham Living where she had lived for the past few years. A funeral mass will be held on Wednesday, July 30, 2014 beginning at 11:00 AM at St. Henry's Catholic Church in Perham. Visitation will be held one hour prior to the funeral at the church. Burial will take place in the church cemetery.

Susan Belka was born on a farm in Gorman Township, Perham, MN on November 6, 1918. Her parents were Joseph and Hattie (Palubicki) Belka. She was the second oldest of six siblings. Susan was baptized in St. Stanislaus Catholic Church in Perham.

She attended a one room country school near the Belka farm. As a young girl Susan survived a bout with the disease Black Diphtheria. In 1966, at the age of 47, Susan had breast cancer and was probably the oldest cancer survivor in the Perham area.

Susan married Henry Parchem in St. Stanislaus Church on January 19, 1937. Together they had three daughters. They were married 29 years when Henry died suddenly in 1966 at the age of 50.

Susie will be remembered for her love of family and friends. She loved playing cards and truly loved her poker group of over 40 years. Susie loved baking and cooking for family. She was a lifelong member of St. Henry's Catholic Church, Christian Mothers and Catholic Daughters.

Susan is survived by her two daughters, Joan Guck of Perham and Sandra Krekelberg of Minneapolis, MN; her 12 grandchildren; many great-grandchildren; and her brother-in-law, Warren Wasescha of Stillwater, MN.
To order memorial trees or send flowers to the family in memory of Susan Ruether, please visit our flower store.